When Yalanga Orienteering Club was first formed it was known as Lone Orienteering Club (or possibly Lone Orienteers Club). It is unfortunate that records of those early years are lost in time. However, copies of minutes from meetings exist from November 1978, and the earliest map used by the club, that is dated and copies of which still exist, is dated 1977. This map was named Coach Road Reserve. The commencement date was, therefore, in or before 1977. Lone was an affiliated club under the Orienteering Association of South Australia (OASA).

The club produced an M21 champion and conducted two “very successful” events during 1978. However, the club was beginning to struggle. Maps were becoming “redundant” and there was a lack of helpers for mapping and events. At one point there were only four members, one of whom felt the pressure and soon left to join another club. The chairman (as the president was then known) proposed near the end of 1978 that the club either cease to exist or start a new lease of life under a new name and an active membership drive.

A list of names derived from Aboriginal words was put forward at a meeting on 15 November 1978. This was reduced to a short list of four names, the new name to be decided by a vote of members at a social meeting at Old Coach Reserve (now part of the Knott Hill map) on 26 November 1978. It is assumed that the name “Yalanga” was selected at this meeting as in the following year, surviving minutes show the club as Yalanga Orienteering Club. The kangaroo was chosen as the club emblem and the club colours as blue and gold, although the gold is usually rendered as yellow.

This was good enough evidence (and excuse) for the club to celebrate 25 years as Yalanga on 9 November 2003 at Belair National Park. This was a big social occasion, and as per tradition, was preceded by a novelty O-course. The occasion was attended by the majority of current members and families together with many previous members and their now grown families.

The Growth Years
The change of club name and revived enthusiastic drive worked. The club, now known as Yalanga, soon began to grow quite rapidly. Several new members joined over 1979-1981, with a large influx of new members in the early 80’s. Many of these new members are still active members of the club (in 2004). The longest serving member of the club has been with us since 1979. Along with more members, new maps were produced and old maps revised to the latest standards, more events per year were run, the financial position of the club improved (from $116.84 in the early 80’s), and there were more social occasions.

Many of the very early maps as Lone Orienteers were black and white maps. Then in 1997 two three-colour maps were produced, followed in the early 80’s by some five-colour maps. In those early 80’s with the club running more events per year, there was a shortage of club-owned maps. Some areas were used several times per year and frequently it was necessary to borrow maps from other clubs. However, with increasing membership and those members gaining experience in all aspects of orienteering, it was possible for the club to produce good quality maps of new areas. There's no doubt that the production of these maps was a great boost to the morale of the club which had hovered on the brink for so long. Many of these later maps were produced in areas that were away from the traditional orienteering areas of the Adelaide Hills, in areas such as Burra in the mid-north and in the Riverland. Some enthusiastic members were involved with orienteering in schools and produced many maps of school grounds and suburban parklands. The latter were used by schools as well as for park-style events particularly in the hotter summer months. In around the year 2000 modern technology was adopted and maps were drawn using OCAD (a computer program specifically designed for drawing orienteering maps).

From the two events run by Lone Orienteers in 1978, Yalanga now regularly ran 5 to 7 events per year, about the same number as the other metropolitan clubs. Starting from around the mid-80’s, Yalangan members had gained sufficient experience to map and run major events such as Badge Events and State Championships. Yalanga’s organisational skills are highly regarded in the Orienteering community, and have been exercised on numerous occasions to create or contribute to major events. Yalanga has been successful in running the finish procedures and getting results out in a timely manner, for major OASA events such as 1998 Broken Hill Easter Carnival, and the National Championships in the Flinders Ranges in 2002. Additionally, Yalanga organised and ran a highly successful State Championships near Burra in Sept. 2004 (photos & results) with everything running to perfection, again in a remote area.

Although the club as Lone produced an M21 Champion in 1978, there was a short lull in members achieving notable performance status. This was no doubt while the club concentrated on organising its activities. However, Yalanga members now regularly win or come high on the list of winners at local, State, National and International level, and in a wide range of age classes, both male and female. Many members also take part in, and do well in the allied sports of MTBO (mountain bike orienteering) and Rogaining.

The social aspect of the club has been regarded as very important right from those early days. At some time in the early 80’s the club was regarded in some circles as “the social club” – tending to concentrate on post-event activities, in particular on round-the-campfire activities, more so than on on-course performance. On more than one occasion after an event run by another club, Yalanga members have been asked to leave as the organisers wanted to lock the gate and go home! Some of these extremes have moderated, but social activities such as the annual dinner or lunch and trophy presentation and the post-AGM activities remain central as important dates in the calendar.

On the official side, the club became incorporated on 27 June 1984 as Yalanga Orienteers Club Incorporated, with a revised constitution. The constitution was revised again in 1996 in line with revised legislative requirements. Since the late 1980's Yalanga has functioned as a moderately successful middle sized club. It is now the owner of many maps , largely thanks to the field-working efforts of Irena Palmer and the cartographic skills of Ian Smith. It has also played a big part in the development of schools orienteering thanks first of all to Barb Smith and later Irena Palmer.

The Traditions
Traditions are, of course, important to all organisations and Yalanga has many traditions, some of which are different to the usual way of running orienteering clubs, and some are worthy of further mention.

The way Yalanga conducts its business started in those early days of the late 70’s with only four, and then three members. When the committee met, the whole club met and made decisions on club business. Even to this day, although Yalanga has the usual elected committee, nearly all club business is conducted at club meetings to which all club members are invited. The great advantages to this way of conducting business are that all club members can become involved; it encourages team spirit; enables new members to feel part of the club much quicker; members are more likely to take on tasks; and it has a social side with the post-meeting gathering round coffee, beer, and delicious nibbles.

Another Yalanga tradition is the president’s prerogative to decide on the annual trophy winners. The trophies include Club Champion, Mappers Award, Junior Encouragement Award, Performance of the Year, and the Barb Wire Jocks! The president never awards him/herself – one “disadvantage” of being president.

Two of these awards need special mention/explanation. The first is the performance of the Year Award. Contrary to what one may think, “performance” refers to something a member does that is real bad or dumb. Examples include the following:

In a team relay, forgetting to punch a master control not once but twice!
For sending both team mates to the same control!
For exchanging two controls that were in the right locations!
For spending 60min on a 400m leg at a State Champs!
For getting 4WD’s heavily bogged during control pick up (two members)!

Some members have even won this trophy twice!

However, the Barb Wire Jocks (BWJ) award is regarded as special (to non-winners) and is probably unique within orienteering clubs. The term "barbed wire jocks" was a term quoted among a group of Yalanga runners in the early '80s, usually being used to describing a running feat out of the ordinary, that was considered to be heroic, or foolish, or both. Then in 1983, Peter Thompson (who was Yalanga President at the time), while competing at an orienteering event at Kenton Valley, was struck in the thigh by a (spent) bullet fired from a shooting range not so far away. It knocked him over, and lodged in his leg. Peter had the presence of mind to remove the bullet, stop the bleeding, and continued on and completed his course.

And so the Yalanga Barbed Wire Jocks Award was born with Peter Thompson as inaugural winner. The criteria for this award are simple - you must be injured or become distressed to a level where any sane person would retire and seek assistance, but nonetheless refuse all help and complete your course.

The trophy is not awarded every year, as it needs that deserving effort (or opportunity) that does not readily arise. Nevertheless, the BWJ award has found deserving recipients for most of the years since it's advent. The trophy itself is a tasteful weave of agricultural barbed wire, in the shape of underwear, painted red, atop a wooden block mount (festooned with badges since 1983).

In Summary
While arising from humble beginnings, Yalanga Orienteers Club has become a respected club with its own culture and traditions, and triumphs, and continues to play a significant role in the orienteering life of our region, in its own distinctive way.

It is a multicultural and family focussed club with members of all ages. All welcome to be part of the Yalanga family. 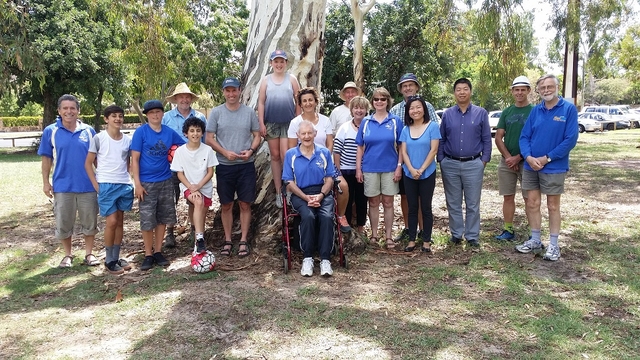