EARLY HISTORY OF THE WALLARINGA ORIENTEERS

Based on ‘A Short History of Wallaringa’ authored by Jenny Casanova and Peter Cutten in 2005 with further information sourced from interviews with John Clark and Tony Rathjen in 2013 and from other sources in 2018/19 updated by Peter Kreminski in 2019.

We hear elsewhere of a loss of membership numbers, leading to the amalgamation of clubs; the reverse was true in the southern Adelaide Hills during 1977-1978. The Onkaparinga orienteering club (OO or OOC) had grown so big, so quickly, that in mid-1978 it was decided to form two clubs. Those living in the southern hills were to form Onkaparinga Hills Orienteering Club (OHOC), whilst those from the plains were to become the Wallaringa Orienteers (although early documents use the name ‘Paringa’ to hint that the other club would become ‘Onka’ OC). The inaugural meeting of both OHOC and the Wallaringa Orienteers (its official name, though it is often referred to as the ‘Wallaringa Orienteering Club’) was held on December 4, 1978.

To provide experience and leadership Anthony (Tony) Rathjen, his wife Cynthia and son Peter became foundation members of Wallaringa (meaning ‘running through’ in an Aboriginal language) along with John and June Clark (already Life Members), Geoff and Marion Davidson, Graham Wilson, Brian O’Neil, Jeremy and Maxine Cape, Graham Wilson, Peter Cutten and Peter Ashforth and others whose names are not recorded.

Rod Nicholls, Brian O’Neill and Jim and Geoff Rathjen (and others) came in as new participants in orienteering in 1979.

In 1980 Greg Rowberry, Peter Naumann, and Sally and Paul Flavel joined the club. Peter designed the club logo and Paul the club letterhead that year.

John Clark recalled joining the original Onkaparinga club after being encouraged to do so by his son Peter Clark, who he believes was himself inveigled to become an orienteer by Tony Rathjen. However, soon after becoming an orienteer, Peter went overseas for a full seven years (1976-1983), so was not there for the formation of Wallaringa, but was made a member of Wallaringa (in absentia) at its formation and became an active participant on his return.

The earliest available membership list dates from 1992. There were 36 individual memberships and with many being families there was a total of 110 Wallaringans. 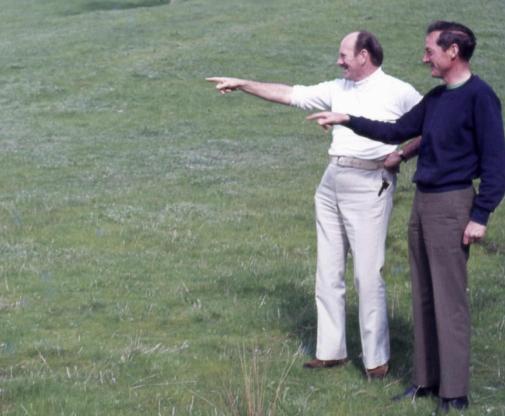 Wallaringans and the Beginnings of OASA

John Clark played a prominent role in the process leading up to the formation of Orienteering Association of South Australia (OASA) and its affiliation with to the Orienteering Federation of Australia in 1977. This included working within the constitutional committee which recommended that OASA become an association of clubs. John himself recalls teaming-up with fellow Onkaparingan John Daehnke (who went to OHOC on its formation) to draw up a constitution for both clubs and this then becoming the basis of that of OASA. John Clark himself is most proud of the service he gave to the South Australian orienteering community through providing regular barbecues at events. These provided a much needed social focus for participants, in a sport which is usually focussed on individuality.

Tony Rathjen became President of OASA in 1979 and served as such also the following year. Greg Rowberry was OASA Treasurer from 1984 to 1986. During 1985 and 1986 Peter Cutten served as OASA president and then took over as treasurer for three years from 1987.

The club’s logo was originally a dingo (which looked rather like the Rathjens’ dog’s head) on a blue and white O flag. The logo and resultant banner was the 1980 work of Peter Naumann. It was 95x95 cm in size and hand painted. Later, the logo changed with the club colours of blue, orange and white depicted as three hills for orienteers to run through and a new banner was flown regularly from January 2007.

In 2005 it was recorded:
The maps of Belair and Mount Crawford became the common property of Wallaringa and OHOC, each having shared use of these areas for events. Over 25 years the following were mapped: Devil Gully (State Championships 1979 and 1994), Hannaford Hump (State Champs 1985), Moon Rocks in 1992 (by David and Chris Simmons), Narrinyeri Hills (‘discovered’ by Jim Rathjen), Woodhouse Scout Camp, Arbury Park, Mount George, South-east Parklands and Tothill Range. The Rathjen family mapped Kyeema, Scott Creek, and Eden Hills in the late 1970s, but the former two have become ‘defunct’ while the latter is now part of OHOC’s Craigburn. Merridee is now a Wallaringa map, although it was produced by Tintookies members Jean and Basil Baldwin.

More recently:
A list of Wallaringa maps produced in the first twenty years of Wallaringa’s existence. During this time our maps were usually produced by club members and it was only later that professional or semi-professional mappers were engaged.

The club decided to buy its own O trailer rather than ‘chase all around town’ for the OASA one. A long time stalwart of the club, Phil Stoeckel, along with Peter Cutten first negotiated the purchase of a pop-up caravan in the mid 1980s. An active club grant from the Office of Recreation and Sport enabled us to replace the caravan with a smart trailer c. 2002. Unfortunately this was lost to theft in February 2007 but quickly replaced and is still in use in 2019.

Three W21 Elites in One Club!

As with other clubs, Wallaringa members come and go (and then re-appear years later). Over the years, there has been a dearth of young women, but the arrival of the Casanova girls and later Amber Tomas helped redress the imbalance, while some ‘occasional’ orienteers and willing non-orienteer workers have made lasting contributions to the club. Wallaringa was one of the few Australian clubs which could, during 2001-2002, field an elite W21 relay team.

John Clark carried over his life membership of the Onkaparinga Club to the Wallaringa Club at its formation in 1978 (an honour he felt was bestowed on him because the club committee decided that having a life member would lend the club gravitas). He felt he should reciprocate, and in 1983 he donated the Clark Trophy for Wallaringa Junior of the Year. The trophy has been awarded annually and each year John Clark has attached a small engraved plaque to the wooden shield naming that year’s recipient. The first awardee, in 1983, was Jane Rathjen. Other early winners were Ben Davidson in 1984, Tanya Robertson in 1985 and Jenny Casanova in 1986 and 1987. When last awarded in 2015 the trophy was held by Justin Shao.

Wallaringa has learned as have one suspects all other clubs, that the sport’s negatives - such as protests, complaints and too much work falling on too few, can lead to burn-out, resignations and early retirements but, at any time, there have always been enthusiasts who kept the club alive, continuing its significant contributions at both state and national levels, and never more so than when  the club takes responsibility for a major tasks at an Australian Championship or three day event, such as running the results system and display.

During the late 1980 Wallaringan events were characterised by enthusiasm rather than finesse, as new members tried their hands at course-setting and organisational ‘baptisms of fire’. The club endured a lean period in the early 1990s with some founding members going interstate, while others had demanding work commitments, and the remaining core group began to experience burn-out. Through some key members it was kept afloat and it re-invented itself, acquiring the aforementioned three hills logo to match its new image. We are an eclectic and close knit group which always comes together as an effective team. If anything goes wrong behind the scenes you’d never know it, and the comment heard more than once of late was:  “If it’s a Wallaringan event, we know it’ll be a good one!” 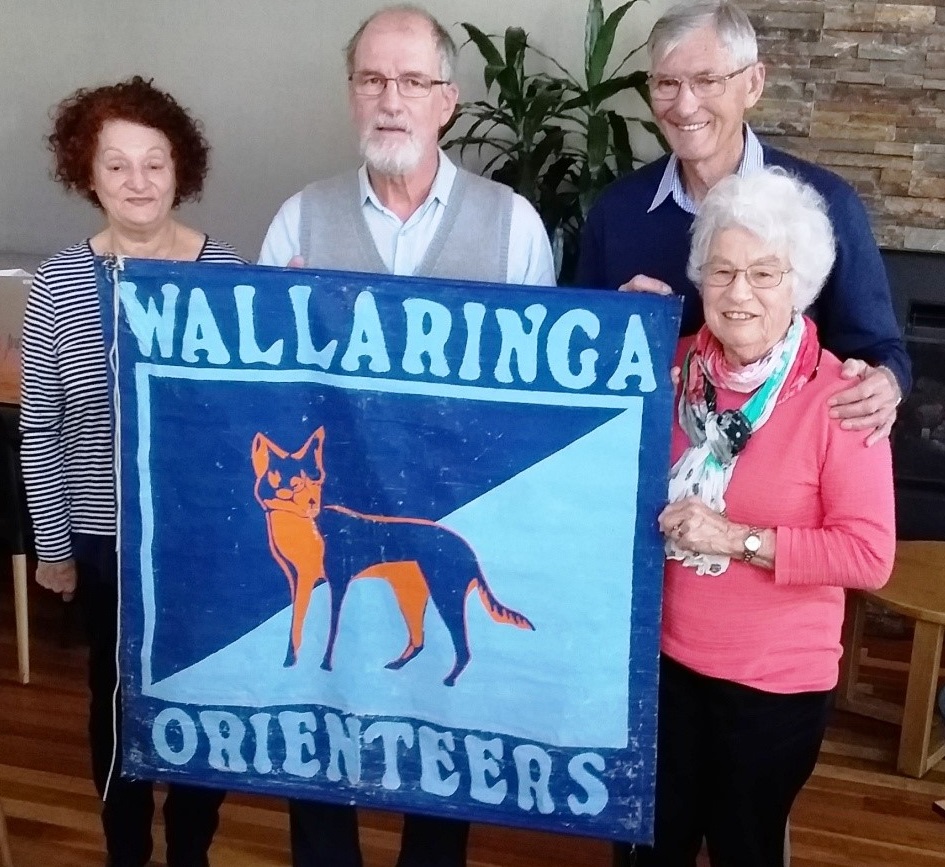 The original 1980 Wallaringa Orienteers banner pictured here in 2019 with four foundation members of the club: Paula and Peter Ashforth, and Robyn and Peter Cutten 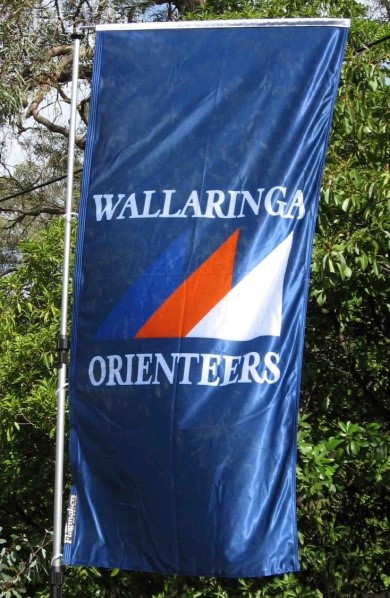