Summer orienteering continues through January and February on Friday evenings with the Twilight Series followed by the Snap Sprint Series.  All events are listed under upcoming events. Note that events go ahead if the forecast temperature is over 35 degree for the time of the event, but may be cancelled on very hot days (40+) depending on the location.

Additional sprint format events and training are planned for the weekend of 22-23 February. Details are being finalized and are to be listed in our event program on Eventor.

Less formal orienteering training is held on Wednesday evenings, generally at 6 PM – these activities are also listed in upcoming events.

And if you can’t make to one of the scheduled events, the DIY courses are also available – with the newest set now in Shepherds Hill Recreation Park. The start location for these courses is at the National Park sign adjacent to the car park on Ayliffes Rd. All DIY courses are listed hereand maps (PDFs) can also be downloaded free of charge. 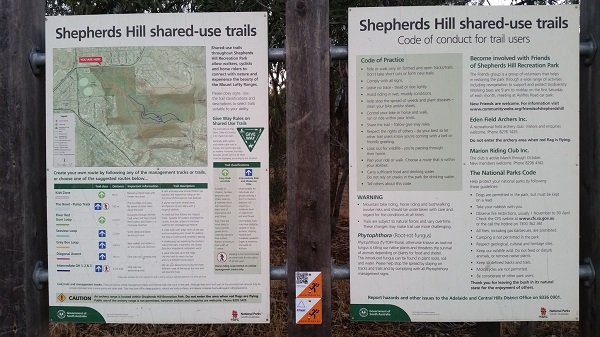 A link to a Google Map – Location mapshows you where the various courses are available. 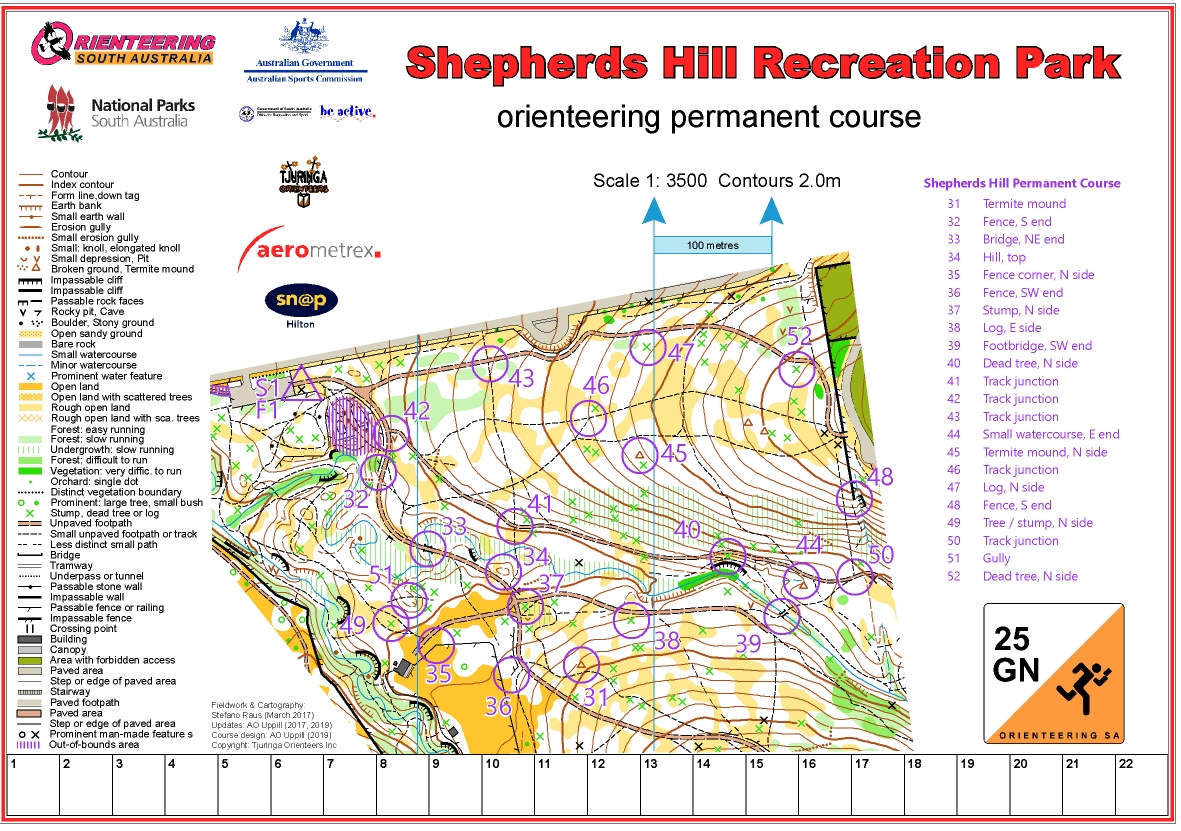 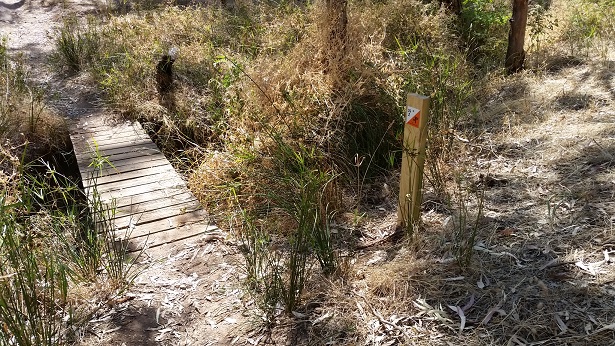 For some armchair orienteering – view this set of videos by several British Orienteers covering the important orienteering techniques. Some terms may vary from Australian usage e.g. "re-entrant" = "gully". From this first video you can access the whole set (will list at the right on the You-Tube page) - https://youtu.be/3r0pQf-Phsc

The 2018 orienteering season ended on a cool overcast atypical summer evening at Glenelg for the final event before Christmas for the Twilight Series. See below for one of the courses. The series resumes on Jan 4 at the Paddocksmap in Salisbury. Some of our juniors and their parents are currently orienteering at the OA junior camp in Victoria. 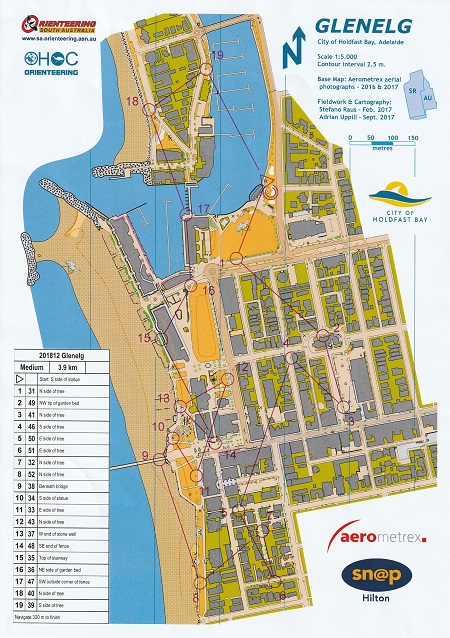 The highlight of the year was the 2018 Australian Championships carnival – you can revisit all the highlights in the special edition of the newsletter – see link on this page. Also see the other newsletter this year for other highlights.

The SA Schools Team achieved their best results for some years, coming 2nd behind the ACT at the schools championships events in the carnival. Toby Cazzolato and Abigail George received the Sue Millard junior trophies, largely for their carnival performances.

Another 2018 highlight was the June long weekend in the Flinders Ranges near Wilpena, with excellent courses in the Long OY event were recognised with Craig Colwell awarded course planner of the year for his courses. See Route Gadgetto revisit the courses.

In August, the Southern Arrows club relays at Moonrocks saw the highest participation in the event, and the SA Long Championships were held at Mulga Valley.

The early part of the year shows the continuation of the Friday evening Twilight Series which is followed by the shorter format sprint events in February. Being urban events these are great as introduction of orienteering to new comers, as well as providing opportunity for regulars to keep fit and practice basic orienteering skills. These events culminate in the SA Sprint Championships at Tatachilla College near Maclaren Vale

The Sunday event program commences in late March, with the following highlights

The program begins with three events in the Riverland of South Australia, in reasonable driving distance for those orienteers who wish to drive from the Eastern states. The areas are approximately three hours’ drive from Adelaide. Two areas with unique terrain area are located in the eroded areas adjacent to the River Murray. One area Crooked Straight has been used for orienteering in the past (previous YA map), however the area has been completed remapped along with the nearby Weila Bunyip Reach map using high quality LIDAR data specifically acquired for the map production. Some of the terrain is shown below. These areas are to be used for the Australian Middle Distance Championships and the Australian Relay Championships respectively. The Australian Sprint Championships will be held on the Renmark Schools campuses on Monday 1st Oct (this day is a public holiday in SA). 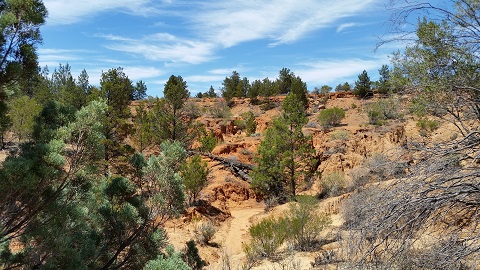 The events then shift to the Adelaide region, for the three days of the Australian Schools Orienteering Championships. The associated public events will provide the option for participants to enter three individual events or if entering all 3, a three day event.

The carnival concludes with the Australian Long Distance Championships and the SA Middle Distance Championships. The long distance event is the area of varied terrain comprising Gumeracha Goldfields. The area is spur-gully topography, but with mixed vegetation. Present are pine plantations from mature to younger pines, native forest often tending to be slower run, and some open areas. Rocky detail is common in the latter and some parts of the pine plantations. The native forest areas contain scattered gold mining areas. Route choice decisions will be the key for the longer courses at this event.

The final event which also concludes the 2018 NOL calendar, is the SA Middle Distance Championship at Keynes Gap. The area has been completely remapped based on LIDAR data. The terrain is mostly open farmland with large and extensive rock detail - shown below from the air. 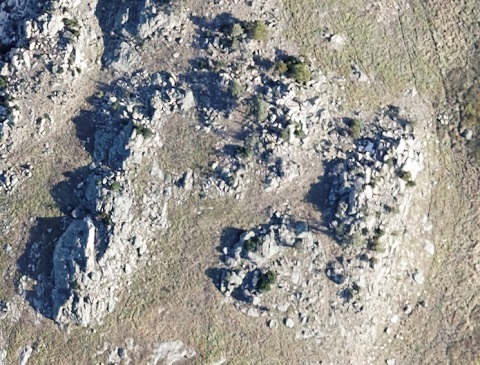