After all the months of uncertainty about gathering limits and social distancing, once it became possible to hold minor events with COVID-plans in place, suddenly there was a glimmer of hope that the club relays and SA Championships events might be able to go ahead after all...

First, the Club Relays were hosted by the Southern Arrows at Wirra Wirra on what was admittedly a rather wet Sunday Aug 30th, so it was really good to see approx. 65 two-person teams compete on Simon Uppill’s complex courses, with some tight finishes between teams, in a beautiful arena alongside the redgum-lined creek.

The calculations for the winning club have now been finalised; the algorithm takes into account results achieved by the clubs in all categories, but also the percentage of the club’s members who competed on the day, so in this scenario, little can in fact beat big - and Yalanga won for the second year in a row:

Two weeks later and in much better weather, the SA Long Orienteering Championships were held by Wallaringa Orienteers on Sunday Sept 13th     in Kinchina Conservation Park with the 1999 Narrinyeri Hills map having been  re-done by Adrian Uppill using LiDAR flown by Aerometrex.

Courses planned by Jenny Casanova (supported by part time controller Andrew Kenendy - who had to wait to get out of quarantine to do the final field check) utilised the eastern escarpment with many trickssy rockses, and attempted to minimise traverses of the rather-green regrowth area from 2005 bushfires. The first controls were in numerous different directions from the start, leading to some interesting routes (not necessarily route choices) and the final control on many courses offered expansive  views out over Murray Bridge and the surrounding plains.

It is not known how many competitors also attended the model event on Saturday, but some of those who hadn’t, were overheard to wish afterwards that they had done so...

Organisers Frank Tomas and Peter Kreminski would like to thank the 135 (!) people who entered, for making this event a success – and for those of you who didn’t collect your placegetters’ certificate on the day, see Jenny at one of the Flinders Ranges events on the October long weekend! 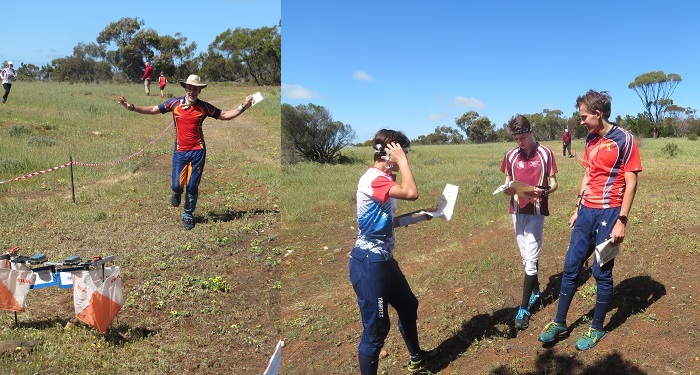